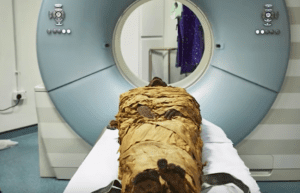 After 3,000 years, Nesyamun has something to say. And amazingly, it was via a CT Scan that this happened. Imagine the power that CT scans can provide.

Once a high-ranking priest in Thebes during the reign of Ramses XI and now a guest at Leeds City Museum for 200 years, Nesyamun’s voice was heard once again with the help of scientists and CT scans done at Leeds General Infirmary.

Researchers were able to mimic the voice by recreating much of his vocal tract using medical scanners, 3D printing and an electronic larynx. The effect created “the sound that would come out of his vocal tract if he was in his coffin and his larynx came to life again.”

In a paper published recently by the journal Scientific Reports, the authors say the technique allowed them to produce a single sound somewhere between the vowels in “bed” and “bad.”

One of the researchers put an otherworldly spin on the project.

“While this has wide implications for both healthcare and museum display, its relevance conforms exactly to the ancient Egyptians’ fundamental belief that ‘to speak the name of the dead is to make them live again,’ ” co-author professor Joann Fletcher of the archaeology department at the University of York said in a news release, noting “Nesyamun’s stated desire to have his voice heard in the afterlife in order to live forever.”

Hollywood Diagnosticss Center has been recognized as a leader in the medical Diagnosticss field while performing over 30,000 Diagnostics procedures annually.  This includes the echocardiograms discussed in this article. The center continues to be at the forefront of medical technology by progressively updating its equipment and procedures to reflect the latest advances in medicine. HDC is your complete, one source provider of all Diagnostics services.

If you require for any reasons an MRI, a PET Scan, a mammogram, ultrasounds of any kind, an EKG or even a bone density scan, this is the center that can take care of all of those tests and needs and more. You can even request an appointment by clicking RIGHT HERE! Don’t wait as this is your health.